MIG was proud to provide event technical services at the annual AdvoCare National Success School. Held at the AT&T Stadium in Arlington, TX for the last five years — the home of the NFL’s Dallas Cowboys — the annual training and sales conference focuses on celebrating the achievements of the company’s independent distributors, while also providing education, inspiration and motivation for continued successes.

Seth Tours, of Multi Image Group’s technical services team, engineered the video production elements of this massive live event for AdvoCare. The main point of focus in this event is the center hung, four sided LED display scoreboard. It is currently one of the largest in any stadium and measures 160 by 72 feet (WxL), with a display ratio of 20 by 9. Tours states how usually the imagery is stretched on this LED display, but “for corporate branding and logo purposes that is unacceptable. What we did instead is pre-shrink it, so it looks proper.” Tours achieved this by adding a Christie Spyder X20, which is a versatile hardware-based video processor combined with the flexibility of a universal routing switcher. He used this in conjunction with the in-house Sony Production Switcher in the stadium broadcast suite. MIG specifically built their content carrying LED screens on stage to match the unusual dimensions of the screen with a 20 by 9 aspect ratio. Pixled F-11 tiles were used, which “allowed us to send the same info to the LED’s that we brought in, as we were already sending to the permanently installed LED,” Tours noted.

Jeff Reeks, lighting and production designer at MIG, was presented the challenge to stage the sideline of the stadium. From a technical services standpoint, “wrapping this huge visual element into the three-day event proved challenging on a design and technical front,” according to Reeks. Normally, a front light truss would be placed where the LED screen was positioned, to block any lighting hitting the stage. Additionally, Reeks states that “audience sight lines became an issue as well, since audience seated from the 300 level to the upper decks would be looking right through the trussing as well.” The initial solution of placing a truss in the upper decks created illumination problems. Reeks came up with a solution of having ground supported “up and overs” built on the 200 level. He placed 69 VL3500’s in this position. Their lumen capacity gave him the color temperature he needed for cameras, while their shuttering capabilities allowed for spill control, as at that distance the diameter of the beam was quite huge.

5 Ways to Show Your Virtual Audience the Love

6 Ways to Mesmerize Your Virtual Audience

3 Things You Need on Your Virtual Event Checklist 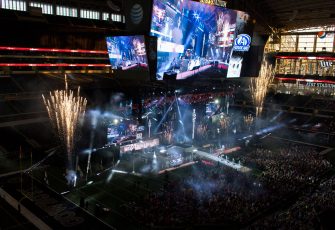 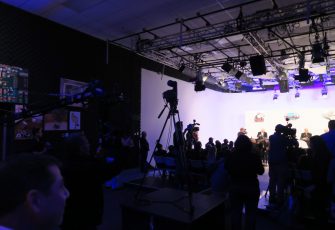 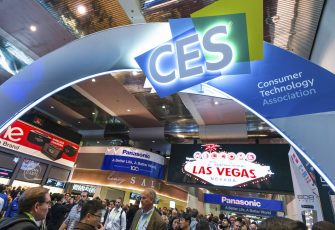